When I wrote ‘The Fall. THE FALL and the Apple’, I only thought of two Falls that were part of my personal story.

There is another, however, one which I have only been introduced to since living in the UK. One I witnessed yesterday, and only the third time in such a spectacular fashion. But this time there was a difference, for in the middle of the experience I connected it to the other two Falls, and it too was connected to apples for it occurred within the mysterious realm of Avalon, within sight of Glastonbury Tor.

This third Fall is that which occurs at the end of a Starling Murmuration sequence.

We were at RSPB Ham Wall on the Somerset Levels. I had spent the day indoors at a meeting nearby whilst my partner explored the reserve, and he brought me there after he picked me up to share what he had discovered. During the day it had gone from sunny and bright to overcast and windy, eventually adding mizzle to the mix.

We walked down to the big hide and back in a cold wind, waiting for the Starlings to come in for the night. I had seen the murmuration there before, from a distance, with a friend who works for the RSPB, a couple of years ago. I had also seen it when out on the Levels many years ago, also from quite a distance the big sky the sky dancers stage. My partner had never had the experience, seen the display.

At the time posted on the notice board at the RSPB building on site, the Starlings began to arrive. Last evening was different from the previous times I had seen the massed dance, from a distance. I had heard the beating of hundreds of wings swooping over my head. I had watched them turn and swirl and wheel, seen masses of starlings blacken part of the sky and then open up into a loose mass. This time was different.

What I had never seen up close was want happens when the aerobatic display ends: what happens after The Fall.

The Starlings rise and drop several times on the way to the reedbed to roost, but the final act in the aerial ballet, The Fall, I had not witnessed up close. The reedbed was swarming with Starlings. Literally thousands and thousands of them. This sort of display only happens in late Autumn and Winter.

There are no adequate words to describe the spectacle. The entire reedbed roiled and quivered, the chittering was incessant, the sound of the thousands of pairs of wings continued to beat as the mass settled for the night, which took time; it was not a rushed settling in, settling down. Some of the birds stopped to take a bath or have a drink. The reedbed was thick and dark with Starlings as small groups continued to move back and forth. Even when it appeared the space could hold no more, overhead another huge group would arrive from behind us churning and whirling, and then another from the right, over the trees. Fall after Fall after Fall. More and more Starlings arriving.

I could feel the intensity of whatever drove these amazing birds to seek the place of their night’s roosting, the place they would shelter for the night. I wondered who choose the site for the night, of all the various reedbeds on the Levels, wondered why they all came to the one in front of us at Ham Wall. I wondered how they all knew when the gathering was taking place. I was curious how come there were always a few stragglers who came in at the very last. I wondered how they got separated from their group. I wondered if a raptor got to any who were late and not part of the massed sky dance.

So many questions. And, I suppose I could find some of the reasons behind this behaviour; for now, however, I am content not to have the answers. The mystery is fine, essential still. The mystery is part of the magic of experience.

I would love to see the morning rising, and am sure I will manage to do so one day. In the meantime I am left to ponder this Fall, the third Fall, its deeper meaning and its lessons.

Leaves fall from trees in the Autumn. Sap rises in the Spring after the trees Winter rest bringing trees back to life, reawakened. Starlings fall from the sky into the reedbeds to rest for the night. In the morning they awaken and rise to begin their daily cycle again.

For all the words I have written here, I was speechless last evening. Clearly, to me, the marker of a deep and profound spiritual experience.

Yesterday morning I took a walk. I did not have an intended destination, I seldom do. As it was a lovely, sunny, breezy summer morning so I set off at 8am camera in hand, notebook and pen in my waist pack, phone and keys in their places.

I noticed the patterns of the clouds and vapour trails in the pale blue sky. I tried to decipher the messages in the sky oghams. 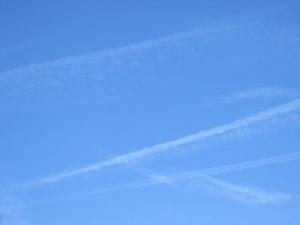 I caught sight of a magpie wheeling off of a branch in time to see and record it. 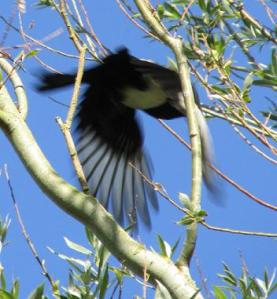 Did not meet any of the dog walkers I know by dog’s name, Archie or Henry or Ben or Mink or Poppy, if not by the theirs. It was an amble. I headed down the street I usually do to leave the village. Turned down the lane I often use and after crossing the bridge over the stream turned left. I had taken only a few photos, by this time.

A damselfly danced before me, landing close enough . . .

I’d not walked far, looking over the stream and across the nearest field when I caught some movement. I used my camera’s zoom to see what it was and this is what I saw.

I watched for quite some time, taking photos and then saw this as well

I continued to watch transfixed and then the two youngest walked into the field. 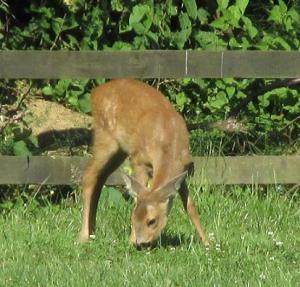 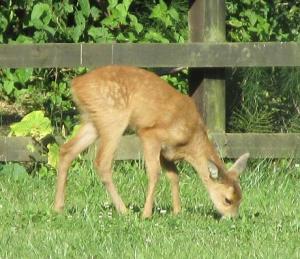 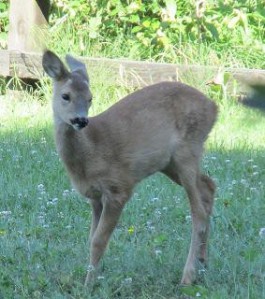 Some dog walkers I didn’t know were coming down the path yammering away and I signaled for quiet. They obliged and I indicated the two young deer. They whispered there were a lot about but had not seen any this young. For a moment they shared the wonder, then went right back to their walk though speaking more quietly than when they approached.

I continued to watch as the two deer moved closer to me and the stream, unaware of my presence.

I stopped taking photos and in a few moments they vanished. I waited and then walked on down the path. They did not appear in the adjacent field . . .

I was amazed at the speed that a severely cut back old willow had regenerated in only a few months. the gyrating dance of the poplar leaves transfixed me . . .

Leaving the path at its end I crossed two small bridges and entered a turnip field. I turned right off the usual pathway and where there were not crops I made my way to sit for time engaging the ash and oak across the field from me . . .

Gazing up through the leaves of the oak in whose shade I sat . . .

Then my phone rang, believe me a rare occurrence. It was a friend asking if I’d like some raspberry pavlova left from a party she’d had the night before. Oh, yes please! As she was going out within the hour I got up, thanked the tree for the shade and asking if I could come back. Yes, you may. I walked a good deal more quickly back into the village. I walked along the stream and through the field and back on to the street.

The magic of the encounters had transmuted from experience to memory. What was a now became a then. Life and wonder, awe and sadness, because unpleasant things move that way, too. For the wondrous and delightful things it enables us to hold them to look back on with wistful fondness. For the unpleasant and painful it gives us the distance to let go when we are ready.

I got to my friends and she sent me off with the pavlova . . .

Eating it was another kind of wonderful experience, and different quality of memory. Raspberries, from her garden, cream and the crunch of meringue, delicate tastes of an English summer.

All that before elevenses. . . I wasn’t sure I could have topped it for the rest of the day. I didn’t even try. But, I was and remain attentive and open to what experiences and memories may yet await.