Yesterday was Autumn at its glorious best.

The sky was bright blue, clear but for a few slowly forming stark white clouds that merged into light overcast as afternoon progressed.

I went out on a walk with my camera. It was the first time in ages. Not only did I not blog all Summer, I stopped taking photographs as well. I got some of a thrush feasting on blackberries. 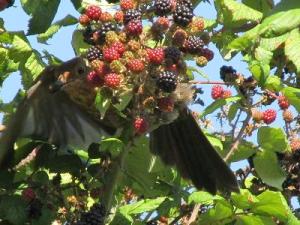 and turning leaves. I walked with meditative deliberateness, aware of each step and noticing any slight movements or sounds. It was an alive walk. I felt alive in a way I hadn’t for many months. The world was alive, even as it was beginning the process of retreating and dying back for the Winter ahead.

I did my last picking of blackberries of the season. And I assure you there were masses left for the birds — it seems unfair that the biggest and plumpest ones are way out of reach for us — but I smile at that thought and wish the birds well in their feasting. I walked through the local recreation ground on the way to the Harvest Festival and Fete and also on the way back. I stopped to notice that the huge Oak Tree had lots of acorns this year and fewer knopper galls. This made me happy because last year there were no acorns that I could see when I walked by a few times.

I spent more time approaching the Oak on my return. It seemed to be something I needed to do. I felt a deep sense of reverence for this huge wide spreading tree. He is a magnificent specimen.

I paced out the diameter of his branch extension and it is 260! That would be feet! I walked around the trunk as well and it came to 16. It seems a very slender trunk to hold such huge branches, but it does.

As I circled in towards the trunk, after pacing it all out, I bowed to him, I have always thought of this tree as he, and when I got close enough I reached out my hand. Immediately there sprang between us a link, some connection. By the time I was close enough to touch the bark he began to speak to me. ‘Welcome daughter‘ were his first words.I pulled back a bit and shook my head. This tree had never spoken to me before.

There is a bigger, older Oak on a field boundary out beyond the village in the opposite direction whose name is Reverend Mother. She is very conversant. Last spring when I was walking there she asked me, it felt more like pleading me, to save some of her children. A number of very small Oaks were growing where they would be smashed by the tractor when it came to plowing. A few days later, I went back and working through the hard ground managed to retrieve two healthy seedlings. They are in pots and doing well, growing at the slow Oakish pace.

After a quick regrouping, I moved towards him again. There was a rush of recognition, from where I could not tell you. He told me I must visit more frequently. He assured me my roots were as securely placed in the soil of this land as his. A reassurance I had not expected. He flooded me with strength and energy. I am sure he is capable of being strict when he wants to be, but yesterday he was all gentleness. Maybe so he wouldn’t scare me away.

On the rest of my walk home, I thought about my genealogy in relation to trees, to specific trees and groups of trees I have made connections to and with since moving to Somerset. I wondered how would I plot, quite literally, my family tree. Though I know I am a daughter of the Yew, I see that at being in the sense of Yew, or a particular Yew (whom I’ve also written about) as, in relation to me, a grandmother/generational matriarch. My connection to the Yew is long standing and sacred in a way that other trees aren’t to the same depth, though Willow is very close in this regard. But I am sure now the other relationships will also deep, broaden and strengthen.

This was an exercise to try and look at very personal way of relating to particular trees in my environment. Since it flowed so effortlessly out my my encounter with the Father Tree, it seemed a valuable way to comprehend my relationships with certain trees. For some the relationship is fairly generic, there isn’t a particular tree I can identify with the assignment that feels right, well, not yet anyway. This is the case for Apple, Holly and Hawthorn, but I’m sure there is one waiting for me to meet it. With these three trees I have a general connection, maybe because Holly and Hawthorns are hedge dwellers and Apples are orchard trees. They live in groups and so to perceive an individual voice is likely to be harder to discern.

I believe I have written before of the Oak tree in whose lap I ran to sit in on the way to the grocery store every week with my mother and brother. Looking back I would say she was more a Nanny Tree. She was a source comfort and familiar presence with whom I felt safe and understood by in a way I never did with my human family.

At the time I could not have said why I felt that way, and it was not anywhere on my young radar that over fifty years later I would feel a so much stronger protective and profound connection to the Tree Folk. If anything that experience enables me, all those years later, to accept the gifts of connection with and claiming by the trees who ‘people’ the land and landscape which I Know is home. These connections will continue to unfold and the understandings expand for me. It seems no accident that all this is following on what happened on the Autumnal Equinox.

This deep, broad and intense Knowing is so sacred that to speak of it is like liturgy and prayer for me.

So, this is a liturgy and prayer I am sharing with you.